Visiting New York by tourist bus is a very practical idea, since it allows you to see the most important areas of the city in a quick way while you travel comfortably seated.

It is a great option to visit the Big Apple in a short time or even to move between the main attractions to see in New York without having to depend on public transportation schedules. I'll tell you everything you need to know to enjoy it to the fullest. 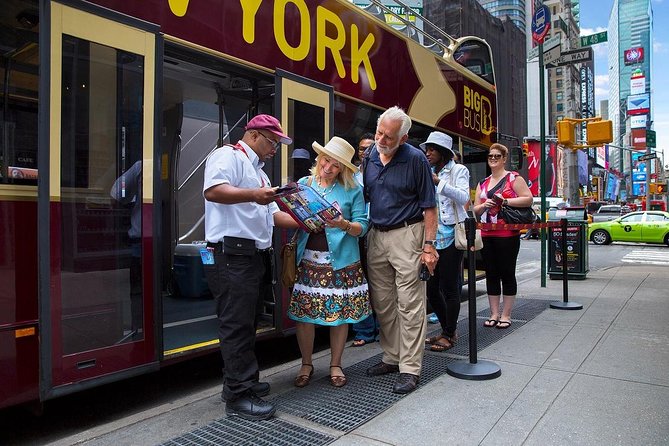 Select between the two-day and three-day passes

Perfect if you want to enjoy the city while taking a break from intense walking and getting around New York while still taking in the sights of its streets and skyline. Includes a one hour cruise.

This two or three-day pass for the New York sightseeing bus allows you to visit, following the guided commentary on board, the most famous sights of New York such as Times Square, Central Park, the Empire State Building or Rockefeller Center, etc.. The bus is from the famous Big Bus company and has two floors with an open roof to take all the pictures you want from the best angles.

You can choose a Classic ticket for the Downtown and Uptown Manhattan tours or opt for a 2-day Premium pass with Brooklyn tour, Harlem tour, the panoramic night tour and a 1-hour Circle Line sightseeing cruise.

Another possibility is to choose the 3-day deluxe pass with all the tours included, the night tour and the one-hour Circle Line sightseeing cruise. You have several different routes and passes to choose from so you can explore New York freely using the bus as transportation, hopping on and off at more than 30 stops throughout the city.

This option also includes a 1-hour cruise on the Statue of Liberty Circle Line and nighttime sightseeing tour with a Premium or Deluxe pass.

Why I like this option: This is the cheapest and most complete option to enjoy the New York sightseeing bus. You can hop on and off as many times as you want during the tour and you can also enjoy a cruise on the Hudson.

The Red Route lasts two hours and operates between 8AM and 5PM. This guided tour of downtown New York can start at any of the 17 stops on this route. The tourist attractions linked by the Red Route are the main attractions you need to see in Manhattan:

The Blue Route operates between 9 AM and 5 PM. This guided tour of Uptown New York City lasts 2 hours and can be started at any of its 10 stops. The tourist attractions that are part of the Blue Route are:

The Purple Route is 1 hour long and runs at 10 AM, 12 PM and 3 PM. This guided tour summarizes the best things to see and do in Brooklyn and can be started at any of the 4 stops that make up the route. Sightseeing attractions on the Purple Route are:

The Green Route operates at 10 AM, 12 PM and 3 PM. This guided tour of the best things to see and do in Harlem lasts 1 hour and can be started at any of its 4 stops. The tourist attractions that are part of the Green Route are:

The Yellow Route is 1 hour long and operates from 6 PM to 8 PM. This night tour is non hop-on hop-off, that is, it does not have the option to get off and get back on at any part of the tour. It has one stop and the tourist attractions that can be seen on the Yellow Route are:

How much does a New York City Sightseeing Bus ticket cost?

From 39 Euros in Hellotickets you can find a ticket that allows you to access the tourist bus of the city from any of its stops and get on and off as many times as you want. If you want to do the night tour, the price is a little higher, it will cost you around 50 Euros.

Children under 12 years old have access to a reduced price and only pay 35 Euros, so it is a good option if you are traveling to New York with small children or as a family. You can also bring your baby and he/she won't need a ticket.

If you are willing to board one of these double-decker buses, it is best to consider the following recommendations to get the most out of the experience.

Activate your ticket first thing in the morning

Tickets can be activated automatically from the first moment you board one of the buses, so it is best to do it first thing in the morning to make the most of the day. No time? Don't worry, if you have a busy morning you can always activate it after 15:00 and the ticket will last for 24 real hours, so you can use it until 15:00 the next day.

If you get a good seat on the top floor of the bus (which is not always the case because there are usually more travelers wanting to take the same seats as you) take advantage of the opportunity to take the full route: you can take photos, take the opportunity to rest and use the route as a good way to locate yourself in the city and then decide at which stops you want to get off.

Do it at the beginning of your trip

If you are going to be in New York for several days and it is your first time in the city, the tour bus is a good way to find your way around the New York City map. Take the tour at the beginning of your stay there to calculate distances, discover new neighborhoods and decide which stops and attractions you will visit during the rest of your travel agenda.

Many of New York's tourist cards include a free ticket to the sightseeing bus or a cruise on the Hudson River. Keep this in mind because if you purchase one of these New York City sightseeing cards you will have free access and it is worth taking advantage of it.

Use it as public transportation

Yes, you read that right. The New York subway is very well connected and its frequency is enviable, but if you want to move between one attraction and another, most likely they are well connected in one of the tourist bus routes. Make the most of your trips and enjoy the scenery as you make your way from a museum to a skyscraper or to the next stop on your travel journey.

The sightseeing bus at night

Another option offered by the City that never sleeps is to take the tourist bus at night. This will allow you to close the day in a relaxed way while resting after a long walk watching the lights of the city. The New York night tour bus is also a good option if you are traveling to New York in winter and want to protect yourself from the cold when the low temperatures are lurking.

It is also a great way to enjoy the Christmas lights if you are traveling to New York at Christmas, undoubtedly the most magical time of the year. On those days when the crowds take over the streets, sitting relaxed on the tour bus cruising through the city at night will seem magnificent.

Other interesting activities in New York

If you're considering booking a tour bus pass, you've realized that the sheer size of New York City is often beyond the walking ability of travelers. If you want to delve a little deeper into all the areas and neighborhoods of the city, I've created this guide about Best New York City Neighborhoods so you can get your bearings and start organizing your itinerary.