The Catacombs in New York are located underground, in the former St. Patrick's Basilica. They have served as a burial place for the most prominent New Yorkers and bishops of the city for over 200 years, until the suspension of this practice due to lack of space.

As of 2012, St. Patrick's Basilica resumed the practice of burying the deceased on Cathedral grounds. This activity may be a bit gruesome for people who are easily impressed, but for those who are not, it is almost mandatory to include this visit in the list of things to see and do in New York.

The only authorized visit to the Catacombs 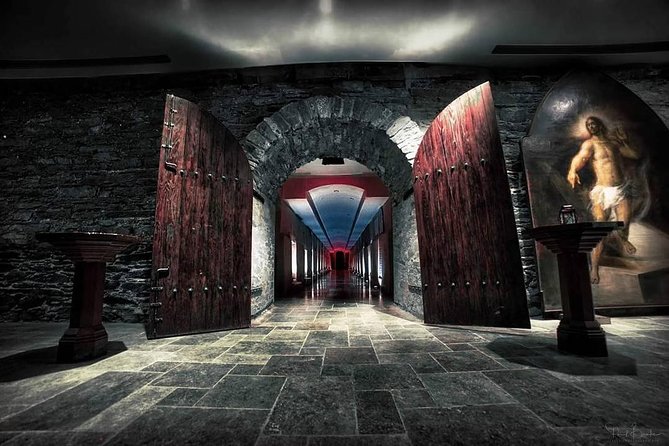 Enjoy this fascinating tour in a group excursion.

You will enjoy an exclusive 90-minute visit to the Catacombs, which includes the restricted access sites such as the two cemeteries.

The New York Catacombs by Candlelight tour includes all the necessary tickets to enjoy the full, unrestricted tour of both the subway portion and the other facilities of the Basilica.

This tour is the only one that St. Patrick's Basilica has authorized to visit its facilities and the catacombs and cemeteries. Inside lie the remains of many New Yorkers who played an important role in the history of the city.

Recommended if... you like history In this tour you will have the opportunity to visit places that are usually closed to the public, such as the two cemeteries of the Basilica.

How much do tickets to the Catacombs in New York cost?

Tickets to the New York Catacombs are quite affordable for the type of activity involved. They cost around 36 euros per person if you buy them through a specialized company.

Ticket prices may vary depending on some factors, such as coupons, group discounts or New York City business card holders.

Are there guided tours of the Catacombs in New York and are they worth it?

You can purchase tickets for this activity in different online sales sites but it is the same activity although prices may vary from one company to another.

Are tickets for the Catacombs in New York available at the box office?

As this is a very special activity and also in high demand, tickets are sold online through companies specializing in New York tour packages or through St. Patrick's Basilica.

It is advisable to buy tickets through tour companies and not directly from the St. Patrick's Basilica Old Cathedral website, because, strangely enough, prices at the Basilica are more expensive.

It is important that you plan this activity in advance and book as soon as you decide the date because tickets sell out quickly, especially if you are looking to visit in high season.

Book your visit to the Catacombs in New York City

Are tickets to the New York Catacombs included in any New York City sightseeing pass?

On both cards, the pass holder is entitled to free admission to the Catacombs in New York, but they are required to reserve the date online in advance.

When you start the booking process, you will be asked for a credit card to which the value of the tickets will be charged and on the day of the visit, when you show the New York Explorer Pass or the New York Pass Go City, the costs charged to your credit card when you made the reservation will be released.

Please note that if you do not show up on the day you booked or if you cancel less than two days before the tour date, you will not receive a refund. If you will be visiting New York for 3 days or more, it is very convenient to buy one of the passes to visit the city, because the main attractions are included for free or with important discounts on the price.

For example, the New York Explorer Pass, has dozens of attractions with free admission and high discounts in several restaurants, stores and shows.

What will I see on the New York Catacombs by Candlelight tour?

The New York Catacombs by Candlelight tour is primarily designed to allow you to see everything that is usually closed to the public, being through these tours the only way to access these places.

St. Patrick's Basilica (Old Cathedral) is the oldest in New York City and was the seat of the bishopric until the Catholic authorities decided to move it to the new St. Patrick's Cathedral on 5th Avenue, which is still the subject of discussion by some of the faithful who do not agree at all with the move.

You will be able to access the subway areas of the old St. Patrick's Basilica, which has more than 200 years of history and has served as a burial place for bishops, high church officials and members of prominent New York families.

The guides on this tour are highly trained and knowledgeable about the history of the basilica and its surroundings. By taking this tour, you will also be able to visit the interior of the Basilica and they will teach you everything there is to know about the Basilica.

Through this unique experience, you will learn amazing stories about the Cathedral and its surrounding area, facts that have marked the Catholics of New York and also the not so Catholics.

Remember that New York was the destination of many emigrants from Italy and Ireland, mostly Catholic countries.

If you want to know the names of some of the people buried in the Catacombs of New York you can consult the list of some prominent citizens buried in the catacombs.

This list was made based on the historical archives of St. Patrick's Basilica (Old Cathedral) and includes only part of the names that can be found during the visit.

How to get to the Catacombs in New York City

The first thing you should know is that you should not go to St. Patrick's Cathedral on 5th Avenue, as that is not the Cathedral where the catacombs are located although the name is the same.

Many tourists get confused, go to the wrong Cathedral and miss the tour, which is very difficult to book. The address for the "New York Catacombs by Candlelight" tour is 266 Mulberry Street (between Houston and Prince Street). It can be reached by both bus and subway.

If you go by bus, the closest stops are 8 and 9 of the Downtown Route. You can also go by subway, the most convenient stops are Prince Street, Broadway, Lafayette Station, Bleeker Street.

Is it advisable to go to the New York Catacombs with children?

There are hundreds of kid-friendly attractions in New York, but the Catacombs are not the best activity to do with kids, unfortunately.

There are even adults who are not comfortable visiting the Catacombs in New York. Keep in mind that you are visiting an underground cemetery and, although from a historical and cultural point of view it is a very interesting activity, there are people who have a very hard time during the visit.

You should also keep in mind that since 2012 burials are taking place there again, so it is possible that on the day of the visit there will be some funerals or people visiting the graves of their loved ones.

In such cases the schedule of the visit may be altered. In New York, there is so much to do, that if you want to enjoy the trip with your children you will have the possibility to do many other activities more suitable for them.

You can opt for tours in Spanish if they do not speak English and you can also choose original and unusual activities to do in New York that suit the age of your children.

How much time do you need to visit the Catacombs in New York?

The "New York Catacombs by Candlelight" tour lasts approximately one and a half hours. When planning this tour, remember that you are in New York City and public transportation delays may occur.

Do not leave for the Basilica too late, it is preferable that you have to wait a few minutes than miss the tour because you are late.

You can ask at your hotel the estimated time it takes for the bus or subway to get to the Basilica to better organize yourself. Of course, make it clear when you ask that it is St. Patrick's Cathedral located at 266 Mulberry Street (between Houston and Prince Street) that you want to go to and not the one on 5th Avenue, as even New Yorkers often confuse the two.

Opening hours of the Catacombs in New York City

The tour "The Catacombs of New York by Candlelight", can be done at different times as it is a guided tour with an approximate start and end time set. The tour is available daily, with the first group departing at 10:30 am and the last group departing at 4:15 pm.
If you have reserved a time slot, you must be at the meeting point at 266 Mulberry Street (between Houston and Prince Street), 15 minutes before the start time to validate your tickets.

If you are a New York Explorer Pass holder, for example, you will be reimbursed for the money held on your credit card at that time.

Tips for visiting the Catacombs in New York City

Where to eat near the Catacombs in New York?

St. Patrick's Basilica is very close to the areas of Soho and Little Italy so there are plenty of places to eat nearby. You can take advantage of being close and visit these two emblematic neighborhoods of New York City and delight yourself with the delicacies sold in their restaurants.

If you like Italian food you will be happy in Little Italy, very close to St. Patrick's Basilica, where you can eat pizzas that are the reference dishes of this traditional New York neighborhood.