For many of us, London is not just Big Ben, Nothing Hill or Hyde Park; for many, London is Diagon Alley, Platform 9 and ¾, Gringotts and the Leaky Cauldron. Welcome to Hogwarts (or almost...).

One of the things to see and do in London if you are a fan of the Harry Potter saga is to visit the film sets of the movies with the Warner Bros. tour. Be careful! The tickets to the Harry Potter Studios Park are in high demand so booking them in advance (I recommend a month and a half minimum) is a must. 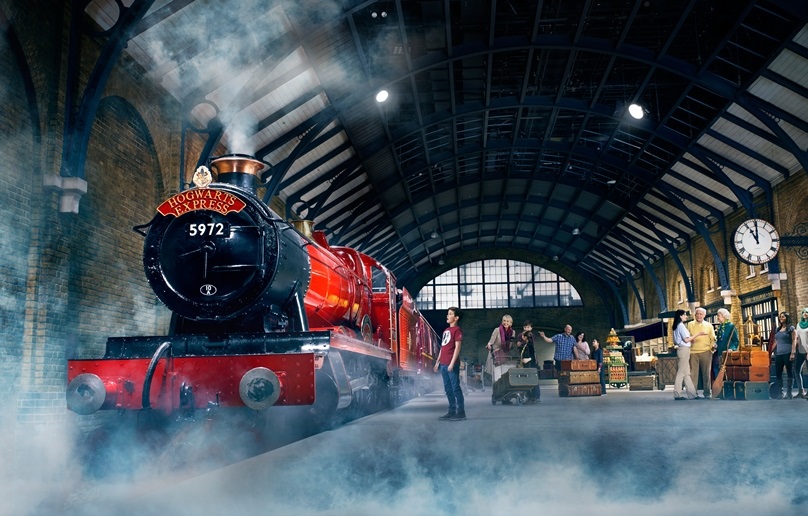 Entrance to the studios and transfer from London

The perfect option to take the worry out of your trip and enjoy the Warner Bros. studios dedicated to the Harry Potter films to the fullest. Round-trip airfare from London is included in the price.

When booking online, you will be able to choose between different time slots; I advise you to go as early as possible to avoid crowds once you arrive at the park and, if you can, avoid the weekend. You will receive an email with all the available information about the meeting point where an air-conditioned bus will take you to the park.

Once there, get ready to walk through Diagon Alley, visit Ollivanders store, Gringotts bank and of course, learn interesting facts about the saga and the making of the films. 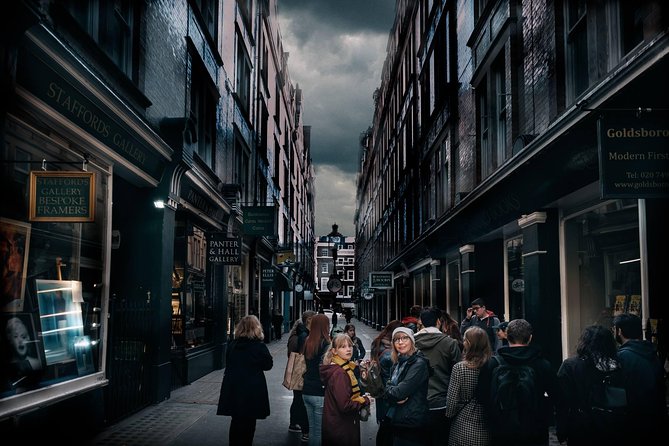 Tour of Harry Potter locations in the city of London.

As you stroll through the streets of London, an expert guide will show you places that appear in or inspired the Harry Potter films.

The city of London is full of places that have to do with the Harry Potter films and with this tour you will not miss them. A guide will show you Platform 9 and 3/4, Diagon Alley or Gringotts Bank while you walk around London like a Muggle.

This tour is also in small groups of (at most) 25 people. This means that the guide can focus on the explanations you ask for in a more personalized way. The guides who do this type of tour have two qualities: they know London inside out and they are also fans of the Harry Potter books and movies. Take the opportunity and enjoy every moment of the tour!

During this tour, in addition to seeing the set design and costumes from the films, you will learn more about the saga and how the films were made, including special effects. Taking into account muggle details, the recommendation is to book tickets for Warner Bros. studios in advance due to the large influx of visitors and hire transportation to and from there, as they are far from the center. A word of advice: be careful if you are offered resale tickets for the Harry Potter studios.

If you want to make sure whether or not it is worth visiting the Warner Bros. studios for the Harry Potter tour, I will give you a small sample of what you will find there. For starters, I'll tell you that the studios are divided into interiors and exteriors and the sets in both places not only have original props from the films, but also cinematic information on how they were made. But step by step.

What's more, London's Harry Potter studios aren't just for watching: in many of them you'll be able to work magic by waving a wand or lifting a broom.

What you'll see in the indoor studios

What you'll see at the exterior studios

As for the outdoor studios, they are also full of surprises. In them you will see the Dursley' s house on Privet Drive (stairwell included), the night bus, platform 9 and ¾, Ollivander's store and many more corners. The only bad thing about this visit is that, once you leave the studios, it will be difficult to mingle with Muggles again.

Book transport to the studios from London

It is not recommended to hire the transportation without having secured the tickets, since their availability is very limited and you run the risk of getting there and they are sold out. In addition, many options for tickets to the park also include travel from London.

In any case, if you have already purchased your ticket and what you want is to hire a shuttle service that will drop you off at the gate, you can take a look at this post about how to get to the Harry Potter Studios from London.

If after the visit to Warner Studios you are left wanting more, throughout the city of London you have different places that inspired the books and movies. Years ago fans had to locate them on their own, now there are expert guides who show them to you on a walking tour of the Harry Potter locations while telling you interesting facts about the saga.

This two-hour walking tour (available in English and Spanish) during which a guide, specialized not only in the saga but also in the history of London, showed us Harry Potter locations in London such as the following:

Platform 9 and ¾ at King Cross Station

At King Cross station you can find a corner where the famous platform has been recreated with a luggage trolley going through the wall. You can take pictures on it and then go through the Harry Potter souvenir store while the guide tells you how this tourist spot was enabled after the success of the films and how J.K. Rowling used this station to set the scene for her books. The pity is that you won't be able to take the Hogwarts Express...

This is one of the oldest markets in London and is inspired by the famous Diagon Alley where Harry bought books, potions and, of course, Ollivander's wands. It is one of the longest and most special stops on the tour; you will discover how reality inspires fiction and how fiction transforms this reality as well. Your guide will tell you all about Knockturn Alley or the Leaky Cauldron Inn and then leave you a few minutes to explore the area at your leisure.

The famous goblin bench that appears in several of the movies is inspired by the Australian Embassy in London, perhaps you had passed by and didn't notice the striking resemblance, but to give you a clearer picture of it, your guide will show you pictures from the movies that prove that indeed the wizarding bench was inspired by this building.

The Premieres and Trafalgar Square

Not everything on this tour revolves around the locations of the films, you will also learn anecdotes about the actors and the significance of the saga and Trafalgar Square will probably be the place that the guide will choose to tell you. It is precisely from there where thousands of fans lived the end of the saga as well as other moments related to the release of the films.

If the two-hour tour is not enough for you, I recommend that you consider the possibility of a private tour of the locations of the saga in which the guide will be dedicated exclusively to you and the group you are traveling with. This tour lasts three hours, is fully adaptable to your preferences and is available in English, Spanish and French.

It is a highly recommended option if you travel to London with children, since you can ask the guide to alternate during the tour locations of the film with other emblematic sights of London. And speaking of children, also for them there is a type of tour that will make them enjoy every step of the way: the interactive tours: this is a type of tour in which the guide proposes contests, quizzes and games during the tour to immerse themselves even more in the magic of the saga.

Finally, you should know that the Harry Potter landmarks are distributed in different parts of London, so it is possible that the walking tour is tiring: look for the option of bus tours if the walking tour is too tiring for you. They are also guided and are an even more comfortable way to enjoy the tour.

Book a Harry Potter tour and excursion to Oxford

Tips for your visit to Warner Bros. Harry Potter Studios

If, like me, you are a real Harry Potter fan, you have probably been waiting for this tour for a long time. To make the most of it I'm going to give you some tips:

Organize your own tour of Harry Potter locations in London

If you decide to take a guided tour of the Harry Potter universe in London, whether it is in a group or if you have chosen the private tour, you have to take into account some details:

If you enjoyed the Harry Potter walking tour experience, be sure to take the London walking tour during your visit to the capital of the United Kingdom. You may think that the Muggle world does not have as much charm as the magical one, but remember that London is also the city of Sherlock Holmes or Peter Pan and that, by itself, has many stories to offer you without resorting to fantasy.

As I say, this was my favorite, but the truth is that the offer of guided tours in London is endless and I have written a guide to help you sort out all the ideas, which are the best tours and why. You can read it in this article about Top 10 Tours and Excursions in London.

If it's not your first time in London and you decide to go out and see the rest of the country, you don't need a long trip. Nowadays there are very well organized tours that allow you to discover both charming villages and majestic cities of England that you should not miss if you want to know a little more about life outside a big city like London. I leave you here an article about 9 Best Day Trips from London so you can see my favorite options.