On the banks of the Thames, the Tower of London is one of the most famous monuments in the United Kingdom. Nearly 3 million tourists visit this exceptionally preserved Norman medieval fortress every year. There are several ways to see the Tower of London: if you prefer to see it at your leisure, you can buy a ticket without queues and if you prefer to learn more about its history and understand every corner, there are guided tours. 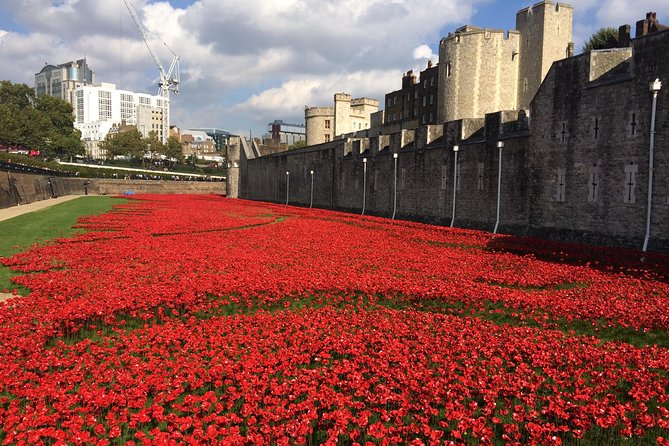 Perfect for an intimate and totally exclusive experience while touring the legendary Tower of London. Take the opportunity to ask the expert guide for tips and recommendations.

If you really want to soak up the history that emanates from the walls of the Tower of London and it is the first time you visit it, the best way to do it is with this private tour of the Tower of London. With this option you would have a guide dedicated exclusively to you and your group, allowing you to focus on the points of interest or information that interests you the most, make a much more personalized tour, etc.

With a duration of between 2 and 3 hours, this guided tour will give you the best route to see the most essential of this immense architectural complex, including the Crown Jewels exhibition, and will explain step by step everything there is to know about the 'Tower of London'. In addition, if you wish, this tour includes travel to the attraction, picking you up at the accommodation where you are staying.

This tour includes a private guide in English who will accompany you all the way inside the attraction to learn about its history and legends in a guided tour.

Why I like this option: This option allows you to visit the inside of the Tower of London with an expert guide who will accompany you and your group exclusively, without having to be part of an organized tour with other participants.

Recommended if... you want to know the best kept secrets of the mysterious Tower of London with an expert guide.

The best attractions in London, at the best price with the London Tourist Card

If the Tower of London is just one of the many attractions you want to visit during your trip, explore the option of purchasing the city's sightseeing pass.

Another way to visit the Tower of London (the most economical if you are going to visit several of the attractions of the city), is to do it with one of the various London Tourist Passes, which you can learn about in depth in this other article I have published on London Pass.

Being one of the most important attractions in London, the Tower of London is included in several of the existing London Sightseeing Passes. The London Pass includes everything you can visit in London in terms of cultural and historical sightseeing. With this card you will have access to more than 80 attractions, the Tower of London among them, and a day tour bus. With this pass you will save time by skipping the queue at the attractions and money by not having to pay the individual ticket for each one. It also gives you access to special offers in restaurants, stores and theaters.

The price of the London Pass varies according to the number of days of use. The maximum duration is 10 days, but you can customize it and pay only for 1, 2, 3, 4, 5 or 6 days. To visualize its convenience: for example, with a 6-day London Pass for adults, priced at approximately 171 pounds, you can visit a number of attractions such that if you paid for them separately, they would add up to more than 600 pounds.

If you want to see the must-see London in a minimum of 4 days, but would also like to spice up your trip with other leisure activities, such as a visit to Madame Tussauds, the London Dungeon or the London Eye, the London Explorer Pass will be your best option.

With this pass you choose the number of attractions to visit, avoiding long queues at each tourist attraction and with a saving of up to 35% on tickets. In addition, you can tour the city in a day by tourist bus and guide you on your tour with the useful digital guide included.

Why I like this option: if you are planning to visit several attractions, the London Pass will most likely pay off financially. Plus, you'll save time, as you'll be able to skip the ticket booth lines at each attraction.

Recommended if... you want to complete your trip with other visits such as Westminster Abbey, St. Paul's Cathedral or the Royal Albert Hall.

Buy tickets to the Tower of London at the box office

Another option is to go to the entrance and buy tickets at the ticket office. There you can choose the ticket that includes access to the Crown Jewels. It gives you the possibility to see in one day its glittering collection of Crown Jewels or explore the place on your own and at your own pace, but you will have to wait in long queues at the entrance.

You can also tour inside with a free guided tour by an authentic 'Beefeater' guard. If you feel like joining this tour, they start every half hour and last 60 minutes. You'll tour the interior of the Tower through the intriguing tales told by these 'Yeomen Warders', guides dressed as the guards who once guarded the Tower's prisoners and guarded the safety of its royal jewels.

What to see at the Tower of London

The monumental complex that encompasses the 'Tower of London' can be overwhelming if you do not have much time for your visit, so I want to recommend some of its essential areas.

The opening hours of the 'Tower of London' vary at different times of the year, sometimes opening from 9.00 to 16.30 and others from 10.00 to 17.30, so I recommend you check them on their official website, depending on the dates of the calendar in which you travel.

How to get to the Tower of London

The Tower of London stands in St Katharine's & Wapping (Tower Hamlets district), on the historic and financial center of London, the famous 'City', so it is perfectly connected with public transport in the city. On your arrival, get an Oyster Card, which you can buy at any of its subway stations, to move in a more agile and economical way around the capital:

The nearest subway stop to the 'Tower of London' is, about 5 minutes walk, Tower Hill (District Line, Circle Line) You can also approach in its light rail, Docklands Light Railway (DLR), since right next to the Tower Hill subway station is the DLR Tower Gateway Station.

Most of the London sightseeing buses, to which you will have access if you choose a London Pass or a London Explorer Pass, stop at the Tower of London. As for the city bus, you can get there by taking lines 15, 42, 78, 100 and RV1.

There are several cruises on the River Thames, which also include the London Pass and the London Explorer Pass, which make stops to visit the Tower of London. The nearest pier is Tower Pier, which can be reached by taking Charing Cross, Westminster and Greenwich.

In general, to move from one end of the city to the other, I recommend that you consider taking a cruise on the Thames. There are different types of cruises, I explain it all in this article on Thames River Cruises in London.

Other interesting details about the Tower of London

I must make an important note when visiting the Tower of London since, although it is an accessible place that will interest any type of traveler, you should be aware that access is not possible with certain needs such as a wheelchair.

It does, however, have several volunteers (subject to availability) to help visitors with special needs. For these there is also the possibility of access with an assistance animal and information in Braille, in most of the attraction, for the blind or visually impaired, as well as the possibility of hiring a sign language interpreter for the deaf or hearing impaired.

There are also audio guides to enrich your visit (about 4 pounds), an elevator to access one of the most legendary places of the attraction, 'The White Tower', and seats to rest your legs at various points of the fortress, as well as several bathrooms, some of them adapted (mainly those on the outside of the Tower).

A bit of history about the Tower of London

Built in 1066, this fortress overlooking central London has been truly 'amortized' during its more than nine centuries of life. It was once a terrifying prison of inhumane conditions, a place of execution for famous traitors to the Crown and later became a Royal residence.

During its history, it has also been used as an armory, Royal Mint and treasury and even as a place of custody of the Crown Jewels and as a zoo for wild animals. There is plenty of history to be discovered within its walls. In fact, the tour of the entire architectural complex will take you no less than 3 hours.

For all these reasons, the Tower of London was declared a World Heritage Site by UNESCO in 1988.

What to visit around the Tower of London

Thanks to the exceptional location of the Tower of London, you can take advantage of your visit to discover other important places in the city. Just 293 meters from the Tower of London you will discover the City Hall, the futuristic style building that houses the City Hall of London and, a little further, 343 meters, walk across the most famous bridge in the city, Tower Bridge.

Nearby, at 569 meters from the Tower of London, you can admire the Monument to the Great Fire, a Doric stone column of 61 meters representing the great fire that ravaged London in 1666 and its subsequent reconstruction.

If you are interested in naval history you will enjoy very much (244 m from the 'Tower of London') the HMS Belfast, a floating museum that was the flagship of the British Navy. Within this area you will also have the opportunity to cross the London Bridge, the bridge over the River Thames that connects the City of London with the district of Southwark.

Take advantage of being in the area to go up to the incredible viewpoint of The View from the Shard, on the other side of the river.

If in addition to the history and architecture of the famous Tower of London you are interested in visiting other key places in the history of England, I invite you to read this other article I wrote on London Westminster Abbey Tickets: how to buy and pricesone of the most emblematic places in the city.

A smart way to move around the big city is the bus with free stops. Don't be swayed by the opinion that it's too touristy, because after all, it will allow you to move quickly between the city's sights while still enjoying the sights. I tell you all about it in the London Hop on Hop off Bus Tours.