Is the Madame Tussauds museum as spectacular as they say it is? Since its opening in 2000, this New York museum has become one of the most visited attractions in Times Square and has deservedly earned its fame with its hyper-realistic wax figures.

At first glance, the Madame Tussauds may not be the first museum you want to visit on your list of museums in New York but I assure you that it will be one of the places where you will have the best time during your trip.

I tell you all about Madame Tussauds in this article! 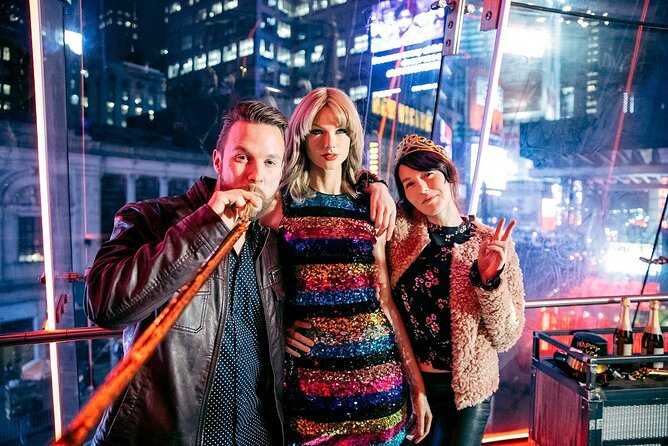 With this ticket to the Madame Tussauds Museum in New York, you will have full access to its more than five floors of exhibits with all kinds of settings in which to have your picture taken with your favorite actors, musicians, and athletes. For example, imagine posing on Oprah Winfrey's interview couch or having tea with the Queen of England.

I never thought I'd be so surprised by the New York Wax Museum - their fame is well deserved! Not only because of how much the sculptures at Madame Tussauds resemble the celebrities they represent, which is a must, but also because you can interact with them in the different sets and take home a sensational souvenir album of your visit.

The striking thing about the New York wax museum is that you will find wax figures that are unique to this place, that is, they are not repeated in the different locations of Madame Tussauds in the world. These are spread over five floors and each of them is dedicated to a different theme.

Why I like this option: if you buy your ticket in advance online you will be saving time, as you will not have to stand in the long queues at the door.

Recommended if... whether you are going to New York as a couple, with family or friends, this museum will ensure you have a fun time and hyper-realistic photos with the most famous people in the world!

Sightseeing cards that include Madame Tussauds

These sightseeing passes provide access to the city's major museums, monuments, and points of interest. Getting one of these passes has several advantages but the main one is that if you take advantage of it you will save money and time by not having to buy individual tickets for each place you visit. Even in some cases, with a New York Pass, you won't have to do the boring entrance queues and it is very convenient to have all the tickets in one place, don't you think?

Madame Tussauds has 5 floors, which are divided as follows:

The museum welcomes you with the Opening Night Party room set as a big party where you can rub shoulders with different celebrities dressed up as Angelina Jolie, Nicholas Cage, or Woody Allen.

The visit continues with other themed rooms such as the Pop Culture or the Sports Zone where you will meet musicians, athletes, and other popular celebrities such as Muhammad Ali, Alicia Keys, or Madonna. You can even shoot some hoops or play baseball as if you were an elite athlete. The best way to get some practice before going to a NBA game or MLB game!.

Then the tour continues through the room where some of the main personalities of the world of culture and politics such as Albert Einstein, the Dalai Lama, or the presidents of the U.S. Here you can take a picture in the Oval Office of the White House!

The wax figures at Madame Tussauds change from time to time so there are always new and interesting things to see. Come and see the latest in the collection - there are over 200 of them!

How to get there

To get to Madame Tussauds New York by public transportation you can take:

What time to visit?

The New York wax museum is open Sunday through Thursday from 10 AM to 8 PM while on Fridays and Saturdays it is open from 10 AM to 10 PM.

Madame Tussauds opening hours are ample so you can visit when it best fits your schedule. However, if you want to go when it is less crowded I advise you to go in the morning on a weekday.

How long does it take to see it?

90 minutes will be enough to see the highlights of Madame Tussauds although it all depends on how much time you want to spend taking pictures.

Is it advisable to go with children?

If you are traveling with children or teenagers this is one of the best museums in New York to visit as a family because they will have a great time. They will be able to walk around Madame Tussauds from top to bottom, taking pictures without fear of spoiling the wax figures (after all they are celebrities used to the flashes) and pose with King Kong, E.T., or Ghostbusters, among many other characters.

What I liked most about the museum

One of the spaces I was most excited about at the New York wax museum was the Star On Broadway exhibit, an interactive experience where you get to step into the role of a real Broadway star. I remember how much fun it was to play a tune on a giant floor piano, just like in the movie "Big"! And singing at the top of your lungs one of the songs from "Phantom of the Opera" along with the main characters. Sounds like fun, doesn't it?

If you are a superheroes fan, the Marvel 4-D Cinema Experience is also highly recommended especially if you visit Madame Tussauds with children. This is a 4-D movie that incorporates 3-D movie technology with special effects that include wind, water, and even smell. It's as if the movie puts you in the middle of the battle between good and evil. Truly a fantastic experience.

Do you know the sinister origin of Madame Tussauds?

There is no doubt that Madame Tussauds is the most famous wax museum in the world and that the story of its origins is both chilling and interesting.

Its creator was the French artist Marie Grosholtz who learned from the German doctor Philippe Curtius the use of wax to model the busts of the most popular characters of the eighteenth century like Voltaire, Benjamin Franklin Jean-Jacques Rousseau, which aroused a growing interest among the public.

With the outbreak of the French Revolution in 1789, the lives of the artist and her master were in danger as monarchists but to escape the guillotine they managed to adapt to the new times by making busts of the new rulers and the people they ordered to be executed.

During the Regime of Terror in Paris (1793-1794) the freshly decapitated heads were sent to the workshop of Marie Grosholtz to quickly make their molds. Thus personalities who were executed at the guillotine as King Louis XVI, his wife Marie Antoinette or Maximilien Robespierre were the first collection of wax models of public figures.

When the artist married she moved to London where she exhibited her repertoire in Baker Street, which combined busts of the victims of the French Revolution with figures of famous assassins, which attracted curious crowds.

Madame Tussauds' popularity soared when Queen Victoria agreed to have her figure modeled in wax and dressed in an exact replica of her coronation attire in 1837. Today some original wax figures still remain at the London headquarters on Marylebone Street that survived a fire in 1925 and the bombings of World War II.

Other Madame Tussauds museums around the world

Madame Tussauds has more than twenty locations in Asia, Europe, the Americas, and Oceania.

Fun facts: How is a wax figure made?

Did you know that to recreate a character, between six and eight kilos of wax are used in each sculpture? Eighty kilos if it's a full body!

In the process of creating a wax sculpture the most delicate parts are the head and the hands because the body is made in plaster if it is covered by clothes.

Normally when the first mold is made, the anthropometric measurements of the character are taken and a photo and video session is done from all angles. Afterward, the character is shown and if the real person being depicted gives their approval, the second phase commences. If this is not possible, the measurements and other data are collected from different sources.

In the second phase, chemical wax is poured over the mold and the sculptors wait about six hours for it to cool completely. Then the eyes are placed, the hair, eyebrows, and eyelashes are implanted hair by hair, which is always natural. Finally, the costume and make-up team does the rest. The cost of a wax figure can be between $ 40,000 and $ 60,000.

Things to do in New York