If you want to feel like a real New Yorker and visit a totally different exhibition, I recommend that you make a stop at the Museum of the City of New York, which runs through different exhibitions the history of the great metropolis from its beginnings to the present.

Specifically, this cozy museum with colonial architecture distributes its exhibitions on four floors, which include photographs, a curious exhibition of puppets, videos and even a collection of dollhouses (yes, dollhouses too!), which tell the story of New York and its citizens.

This is undoubtedly one of the best museums in New York, a must-see if you are passionate about the city and art. 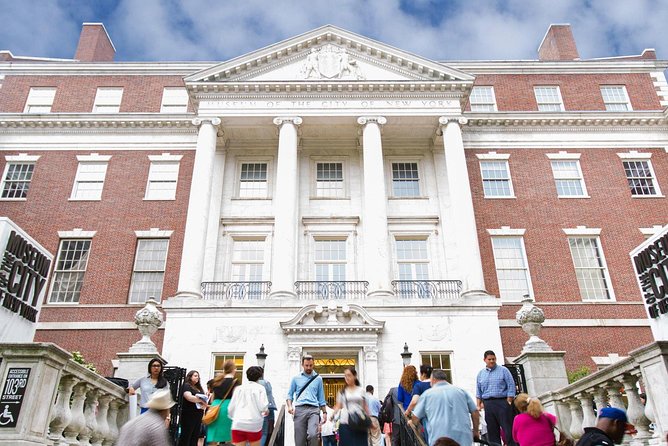 Museum of the City of New York Tickets

Perfect if you want to visit this museum without wasting time at the ticket office and with the security of being able to cancel the plan if you change your mind.

Buying your tickets in advance for the Museum of the City of New York is a must when organizing your trip to the Big Apple. Mainly to avoid a terrible queue at the box office once you arrive at the building. Remember that, after all, New York is one of the most visited cities in the world and, therefore, has quite a large audience in its museums. Be foresighted!

Advantage? You will visit the museum at your own pace and without haste, you will enjoy the preferential access that this option gives you and you will also have the right to free cancellation if you have any unforeseen event or change your mind.

The best part: you will be able to take advantage of the time you have saved in the queue to get to know the city. And in "New York, New York", as Frank Sinatra sang, there are plenty of plans to make because the city of skyscrapers is infinite, so it is best to squeeze every second to the maximum.

Recommended if... you want to avoid the crowds and lines that form on weekends at the Museum of the City of New York.

What is included in this ticket

How much do tickets to the Museum of the City of New York cost?

As I have explained, the most recommended is to buy the priority ticket which has a cost of 18 €. In this way, your reservation will be confirmed immediately and will be sent to your email so you can access it whenever and wherever you want. With a click of a button and without leaving your home!

The price difference between buying it in advance and at the museum window is minimal, only 70 cents, and in case you have a setback, if you have bought it in advance you will be refunded in full. At the ticket office, for example, they will only reimburse 50% if you give at least seven days' notice.

If you are one of those who like to leave everything to the last minute, including the planning of trips (who has not done it once?) it is also a valid option to buy the ticket at the box office. The current price for the Museum of the City of New York is 17,30 €.

However, it does not seem to me the most advisable option according to my experience in this museum. I'll explain why: first of all, buying tickets for the Museum of the City of New York once you arrive at your destination means that you will have to adapt to the museum's schedule and availability (tickets are subject to a time), move quite some time before and keep a long queue to buy them.

Secondly, keep in mind that the museum is only open on Fridays, Saturdays and Sundays, the busiest days for tourists. This means that you will lose a lot of time waiting in line, a time that, especially in winter, when it gets dark earlier, you will want to spend elsewhere.

Are tickets to the Museum of the City of New York included in any New York City Sightseeing Passes?

Yes, if you want to explore, in addition to the Museum of the City of New York, all the attractions of the metropolis without going broke trying, there are several tourist cards that are very interesting and will suit your tastes. Believe me, there is something for everyone, since you can customize them according to the length of your trip and the number of activities you want to do.

Tourist passes that include the Museum of the City of New York:

The Museum of the City of New York is located in East Harlem at the top of Museum Mile at 1220 Fifth Avenue 103rd Street and is easily accessible by public transportation. For me, perhaps the most convenient way to get around the Big Apple is to use the subway, with a single ticket costing around 2,60 €.

Note for the thrifty! If you plan to use public transport several times, the best option is to buy the MetroCard, valid for metro and buses.

Museum of the City of New York Opening Hours

Unlike most museums in the Big Apple, this little gem is only open from Friday to Sunday from 10am to 6pm. I suggest that, before you go, check the opening hours on the official website, as they tend to change depending on the time of year (in winter closes earlier). Note! It also closes its doors on Thanksgiving , Christmas and New Year's Day.

If I may make a suggestion, ideally you should visit the Museum of the City of New York on Friday mornings and avoid Saturdays and Sundays. It's a fairly small gallery and on weekends you may have capacity problems, so you'll be free to roam the exhibits!

Museum of the City of New York Major Exhibits

To get you started, every half hour (between 10:15am and 5:15pm) the museum screens the award-winning 28-minute documentary 'Timescapes', a quick history of New York City that will serve as an introduction to the museum. I suggest you bring your own headphones for the interactive experiences in the galleries. In addition, you'll find an exhibit of antique toys and artifacts, the collection of The Stettheimer House of Museums and many other surprises in the temporary exhibits. A sneak peek:

Specifically, you'll enjoy the exhibition **Collecting New York Stories," a collection of historic and contemporary photographs spanning from colonial times to the recent past and showcasing works by both well-known and emerging artists, including Janette Beckman, Bruce Davidson, Richard Sandler, Harvey Wang and many others.

Through April 3, 2022, you can also visit the Marionettes of New York exhibit that explores the amazing history of New York City's quirkiest residents: the puppets who traveled with immigrant communities to settle in the city. Also, if you are a music lover you will love the exhibition New York, New Music, a retrospective look at the musical revolution of the 80's in the great metropolis.

And my favorite and the highlight of the museum: Activist New York, which, through artifacts, photographs, audio and visual presentations, tells the story of the different movements that the city has had: the anti-slavery struggle, the struggle for free sexual orientation, the women's revolution and religious freedom, among others.

How much time do you need to visit the Museum of the City of New York?

That's a personal answer that will depend on the type of museum traveler you are, your interest in the exhibit and your time in the city. Personally, I find that the exhibit can be toured in about an hour and a half if you want to take a quick tour or about two hours if you take a somewhat more detailed tour.

Keep in mind that, as I mentioned, the documentary 'Timescapes', which quickly contextualizes the history of the big city, will take you 28 minutes. In my opinion, it's better to take your time and enjoy the surprises of the museum, such as the store, which will remind you of your adolescence. Don't just check your list!

Are there guided tours of the Museum of the City of New York?

Yes, there are private tours and guided group experiences. If you want to live a more personal and intimate experience, the museum offers you the possibility of hiring a one-hour tour with an expert guide or with the art curators in charge of the exhibits, which can enhance your experience. This format is recommended for families, university groups, companies, team activities and organized groups. Here are the two options available:

What is included in the guided tour

What is included in the guided tour VIP

Is it worth paying for one of these tours?

It will depend mainly on your budget and the number of people on the trip. Personally, I think it is worth it if you are a large group. For example, if you go with your family (a group of 10 people) the option with guide will cost you 30 € per person.

If this is not your case (and you are only going with a friend or your partner) and you are on a tight budget, I recommend that you buy the preferential ticket and download the Urban Archive app on your cell phone for a free guided tour with your ticket so you don't miss any detail of the exhibition.

Museum of the City of New York Virtual Workshops for Kids

The museum has launched the Project Kid initiative, in which artist and program founder Amanda Kingloff conducts virtual sessions in which she teaches children to create crafts from home using everyday objects with a New York City theme. Remember the Art Attack program and 'The Handyman'? This is something similar.

This art project is aimed at families and those over 7 years old to stimulate their creativity. For example, among the proposals presented is to create a snow globe with New York City in the background or build miniature dollhouses, an idea inspired by the museum's Stettheimer dollhouse collection.

If you liked this idea, check out this guide full of things to do in New York with kids. I'm sure it will make your family trip a success.

When you finish visiting the exhibition, go to the museum store, it's ideal to buy an original gift! You will find curious objects and unique souvenirs, such as Lego pieces to build the Brooklyn Bridge and the Empire State Building.

If you want to take home a nice souvenir of New York (away from the classic postcard or magnet), I suggest that, at the end of your visit, you go to the
museum store. It's small, but it's a real killer - you'll love it!

There you will find Epi, Blas, Kermit the Frog and the Cookie Monster turned into puppets, which you can buy for 9.50€ each; or if you are one of those who like practical gifts, you can buy two pairs of socks with the protagonists of the iconic Sesame Street series for 12€. Acceptable prices for a museum.

There is also space on the premises for memory and activism with objects inspired by the exhibition 'Activist New York'. I was fascinated by the socks of Justice Ruth Bader Ginsburg which, by the way, are now sold out. If you want to know who is this superwoman who challenged Trump and fought for women's legal rights, I recommend you to watch the movie 'A Question of Gender'.

Other interesting museums in the city

And if after visiting the museum you are left wanting more, and you don't want to go to the typical galleries, don't worry, New York has many hidden cultural treasures. My favorites are the Guggenheim Museum, which holds paintings by Picasso, Monet or van Gogh, and the spectacular views of the Whitney Museum, ideal for watching the sunset.

Here is the definitive guide to the 12 best museums in New York. And you, which one do you choose?

Book tickets to the best museums in New York