Visiting Buckingham Palace and attending the Changing of the Guard is one of the most typical and essential things to do in London. Who doesn't remember the "Foot Guards" in red coats and big bear-hair hats?

During a getaway to the British capital, I think the best way to see both tourist attractions is to combine the visit to the famous changing of the guard with Buckingham Palace, if you have the opportunity. And is that most of the year you will have to settle for seeing the outside of the palace from the trellis.

However, when summer arrives and the Royal Family goes on vacation, the gates of Buckingham are open to visitors for a few weeks a year, between late July and early September. If you have always wanted to know the residence of the British Royal Family and its peculiar escort, here is everything you need to know. 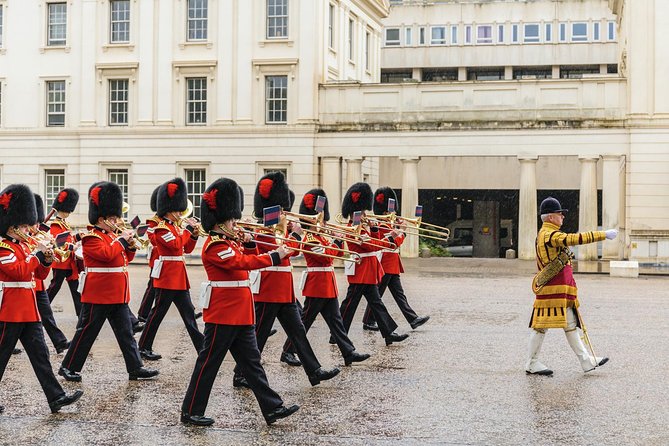 London Changing of the Guard Tour

Attend the changing of the guard and discover the Buckingham inside

If in addition to attending one of the most popular ceremonies in the British country, you want to discover the best kept secrets of Buckingham Palace, join this guided tour.

Although to attend the changing of the guard in London is not necessary to have a ticket, to enter the Palace is a prerequisite and these are sold out quickly because there are very few opportunities to know it inside and many people who want to see it.

We reserved a day of our summer vacation in London to do something typically "British": after seeing the changing of the guard, in the surroundings of Buckingham Palace, our guide Amber was explaining us in a very pleasant way the history of this famous building and the gardens surrounding it.

It was interesting to discover that the Palace originally belonged to the Duke of Buckingham and was later bought by King George III to become his private residence. He also told us many more anecdotes about the Palace and the Royal Family that served as context for what we would see inside.

When we arrived at Buckingham Palace, Amber told us that the tour guides could not accompany us inside as they are not allowed to speak in the different rooms of the Palace, but we had an audio guide that enlivened the tour explaining what we were seeing.

After the visit, we continued walking around the Palace with our guide and later we enjoyed a typical British tea in a nearby hotel in the area to fulfill the most deeply rooted tradition of the country.

Why I like this tour: In addition to attending the changing of the guard, which you could do on your own, you can complete the experience with a day in the purest British style also knowing the inside of the Palace.

Recommended if... you are eager to know the secrets and anecdotes of the British Royal Family and its well-known Buckingham Palace, putting into context not only the changing of the guard but also the customs of royalty.

Book a Changing of the Guard Tour in London

What is the Changing of the Guard in London

It is a military ceremony held at the main entrance of Buckingham to relieve the guards who are responsible for the security of this Palace and St. James's, another that is very close to the residence of the British Royal Family.

Those who perform the changing of the guard in London are a special section of the British army called the Queen's Guard (those in the red uniform with the huge fur hat) whose mission is to protect the head of state, that is, Queen Elizabeth II.

It is a very colorful parade where you will see regiments of guards on foot and on horseback accompanied by a military orchestra that plays both traditional and contemporary music to liven up the show.

I was very surprised that the musicians played songs from The Beatles, Star Wars or The Lion King in the middle of the military parade. It was a lot of fun!

Book a changing of the guard tour in London

What will you see at Buckingham Palace?

After attending the changing of the guard in London it's time to visit the inside of Buckingham Palace. We knew this was a rare opportunity, as it is only open to the public a few weeks a year, so we were intrigued with what we would see behind its doors.

In this tour of Buckingham Palace you will not see the private quarters of the Royal Family but you will see some of the rooms that make up the so-called State Rooms, that is, the rooms where Queen Elizabeth II holds her public audiences and receives her guests at official events.

I must confess that the tour of this part of the Palace is absolutely spectacular, what luxury and what wonderful decoration! It is everything you expect to see when you imagine what a monarch's home is like. It does not disappoint at all.

These are the majestic stairs that give access to the State Rooms of the Palace and it is the first thing you will see when you enter. Look at the walls! You will see some portraits of the Royal Family.

It is one of the most iconic spaces of the Palace. It is decorated with red velvet inspired by the old theaters and here are the armchairs that were used in the coronation of Elizabeth II and Prince Philip in 1953. It is also the place where photographs are usually taken at royal weddings.

This room is one of the most regal and beautiful of the Palace. To stay with your mouth open contemplating its paintings and chandeliers. The Queen uses it when she wishes to meet privately with a guest before a large reception and to relax with her family.

It is a small gallery that gathers some of the most outstanding paintings of the Royal Collection. Today it is used as a waiting room for guests or for small receptions.

It is one of the largest and most beautiful rooms you will see during your tour of Buckingham Palace. Royal banquets, balls and investitures are organized here.

The tour ends in the Palace gardens where you can take a pleasant stroll before meeting your guide and heading to the tea ceremony.

Book a visit to Buckingham Palace

At the end of the tour of Buckingham Palace we left and met up again with our guide Amber for a walk in the beautiful St. Jame's Park, the most beloved park for the English, before going for the famous British afternoon tea at a nearby hotel.

Once there we settled at our table, which we shared with a very funny couple, and while waiting for our tea to be served Amber explained the origins of this curious English tradition, which is believed to have been started by one of Queen Victoria's ladies-in-waiting in the 19th century.

They immediately brought us a lot of sandwiches, cakes, pies, tarts and homemade scones with jam and a thick cream called clotted cream, as well as a variety of delicious teas to drink alone, with milk or with lemon. After immortalizing the banquet for our social networks (another very 21st century tradition) we went on to taste all the delicacies of this very special snack, everything was delicious!

The decoration of the little room where the tea ceremony took place deserves a special mention. Everything was decorated with great care: the crockery, the table linen, the cutlery, the table arrangements... even the waiters were dressed in their best uniforms. The setting was fantastic and we felt right at home.

The afternoon tea ceremony was a perfect finishing touch to a day where we experienced the most "British" side of our trip. At the end, we said goodbye to Amber who was very kind and attentive to the group. I would repeat this experience without hesitation!

Useful information about this activity

Why it's worth seeing the Changing of the Guard in London

The spectacular nature of the palaces combined with the military formality, the parade, the colorful uniforms of the soldiers and the music of the military orchestra is an exhibition worthy of witnessing and something that attracts a lot of attention.

In Europe there are several countries that celebrate solemn changing of the guard in front of their royal palaces (such is the case of Norway, Denmark, Monaco or Spain) but England is the most popular of all and the one that turned this ceremony into a tourist attraction. So I didn't want to miss it for anything!

When can you see the changing of the guard in London and how long does it last?

The parade lasts approximately 45 minutes and takes place every day at 11 AM in June and July. The rest of the year it is held every other day (Mondays, Wednesdays, Fridays and Sundays) except when it rains, as the exhibition is usually cancelled.

To keep up with last minute cancellations in real time, check out the London Changing of the Guard Twitter profile.

Although the event starts at 11 AM there is usually movement much earlier so I advise you to get to the palace around 10 or 10:15 AM to grab a good spot.

Where is the best place to see the changing of the guard in London?

The best views are at the Victory Monument located in the center of the rotunda in front of Buckingham Palace Gate.

To position yourself here, either at the top of the steps of the monument or at the front, you will need to arrive early because they then close the street and do not allow more people to enter the area.

Because so many people crowd right in front of the palace railings, I don't recommend standing there as you won't see the parade well unless you're in the front row. And getting there is a bit difficult but not impossible.

What else to see in London?

With its cosmopolitan and modern character, London is a fascinating city that has something special about it that everyone loves and gets hooked on. You could visit it several times and each trip would still surprise you.

If it is the first time you visit it I recommend you to read the post The best things to see and do in London to know the essential tourist attractions. You can do the route on your own or admire the city from a tourist bus.

This is one of the most typical experiences to live in London and, although it may seem a bit "guiri" plan, one of the best ideas to discover it, either doing the full bus tours or getting on and off (its famous "Hop on-Hop off") whenever you want to explore an area on foot. If you want to know more about this activity, don't miss the article about London sightseeing bus tours.

Would you like to know what else you can do in the city? Take a look at the article The best excursions and tours in London, which will show you in the most varied ways the different faces of London and its monuments.

Finally, London is a huge city that has a lot to offer but its surroundings are also worth spending at least one day of your trip to discover them. Click on the article The best excursions from London to see all the fantastic getaways you can make the most of your trip to the British capital.