Beyond the guided tours of the Colosseum, the entrances to the Vatican, the best squares of Rome, its impressive fountains and the streets of rich opulence, hides a secret Rome, of corners that the eye of the tourist cannot perceive. But you are not a tourist, you are a traveler and that is why you are reading these lines: to get out of the herd and add to your list of things to see and do in Rome 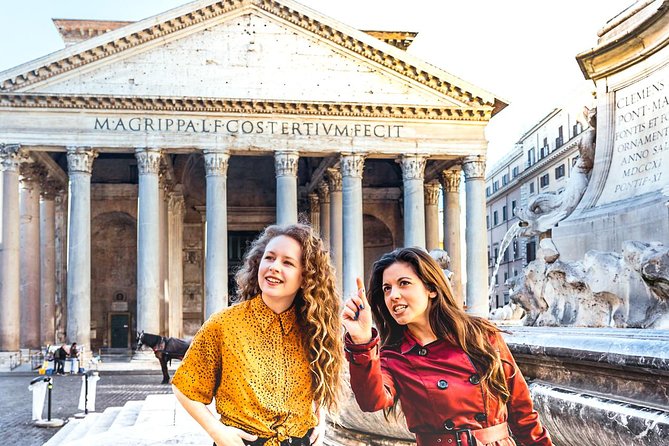 Let yourself be guided by a local guide through the hidden Rome to better understand the meaning of the secrets hidden in the Eternal City.

With this private tour with aperitif included you will not miss any detail of the essential monuments, thanks to a 3-hour tour that will take you also to the less known places of the city.

Piazza Navona, the fascinating oculus of the Pantheon or the narrow streets of Trastevere are some of the Roman corners that you will discover in a different way thanks to this private tour of the hidden Rome. Accompanied at all times by a local guide who will tell you all the secrets and legends, you will visit unique places in a personalized way, that you might not understand on your own. In addition, this tour includes a drink and a local snack. Below, in no particular order, I will tell you the 10 hidden places in Rome that you will reach only if you know how to find them:## 1. Quartiere Coppedè

Rome's Coppedè neighborhood is like stepping into a fairy tale squeezed between four streets, on the corner of Via Dora and Via Tagliamento. There are a couple of very nice buildings and a square with a fountain, which although they will taste a little will make the visit totally worthwhile. An advantage of this area is that not being so well known is a refuge from the tourists who crowd the streets of Rome, where to rest and take some very nice pictures in the evening light. This, among other things, is one of the things I recommend you do on your visit to Rome.

Go to Piccola Londra knowing that you will fall in love with its Notting Hill style houses, only with the Mediterranean magic of Rome. The name of this neighborhood literally means Little London, and it was built in the early 20th century in an attempt to modernize Rome and adapt it to the style of other European cities, and the contrast this neighborhood offers with the rest of the city is a testament to that.

Piccola Londra is just a few streets as the project by architect Quadrio Pirani was never extended, but you can stroll through this unusual part of London on Via Bernardo Celentano, just off Via Flaminia - take the opportunity to see it... if during your visit to Rome you take a tour of the Galleria Borguese and gardens. In just over half an hour you can walk there and keep in mind that Rome is the perfect city for walking.

Book a guided tour of the Borghese Gallery

3. The lock of the Knights of Malta

The Aventine Hill is one of the seven hills of Rome, the southernmost of the city. In the days of the Roman Republic, it was home to many of the city's plebeians, but today it is an area of elegant mansions and gardens. Of these gardens, there is one that is probably a favorite of many of Rome's locals, the Giardino degli Aranci, or Garden of Oranges. Formerly an orchard of Dominican monks, this park (free admission) contains a not-so-well-kept secret of Rome, a keyhole through which the dome of St. Peter's Basilica can be seen in the distance. You can visit the Orange Garden from 7 a.m. to dusk throughout the year, which means that depending on the time of year the hours are 7 a.m. to 6 p.m. from October to February, 7 a.m. to 8 p.m. from March to September, and 7 a.m. to 9 p.m. from April to August.

Both for the views and the walk, the best time to visit the Orange Garden is one hour before sunset, although you will find more tourists - take the opportunity to see it... before or after visiting the Trastevere district as it is a short walk across the river.

Book a segway tour of Aventino and Trastevere

I could choose any of the thousand or so churches in Rome to recommend, after all you will probably visit between ten and twenty on your trip, but the Basilica di Santo Stefano Rotondo al Celio is a place I can't resist mentioning. Honestly, there is no rival for St. Peter's Basilica. But this isn't about finding a basilica to rival the Holy See's: it's about finding the place that other eyes won't mistakenly deem worth perching on. Because of its proximity to the Colosseum, the Basilica di Santo Stefano Rotondo al Celio is the one that perfectly fulfills what we're looking for. Its circular architecture, its somber interior decorated with frescoes of martyrdoms, and its sepulchral atmosphere create an atmosphere that you will find in few places in Rome. To get to the Basilica di Santo Stefano Rotondo al Celio, the best way is to walk from the Colosseum during your visit. It will take you about 10 to 15 minutes to get to Via di Santo Stefano Rotondo 7. The basilica is open to the public from 10 am to 1 pm and from 2 to 5 pm from October to March, and between April and September the afternoon hours change to be from 3 to 6 pm - take the opportunity to see it... when you make your (obligatory) visit to the Colosseum because it is quite close.## 5. Palazzo Doria Pamphilij

This palace is one of the most unnoticed places in Rome. It is in the center of the city, near the Trevi Fountain, the Pantheon and the monument to Victor Emmanuel II, and on the outside it is beautiful, but inside it is a baroque fantasy and contains a museum that you can visit, the Doria Pamphilij Gallery. The museum collection belongs to the family that gives its name to the palace, with works of art by Raphael, Titian and Velazquez among other painters, exhibited in a gallery decorated with opulence and luxury.

A place to rest from the hustle and bustle of the Roman streets, especially inside the museum where you will find a colonnaded courtyard where the sun shines in a special way. The entrance to the Doria Pamphili museum costs 14 €, but comes with an audio guide. It is open to the public from 9:30 am to 7 pm on Saturdays, Sundays, Mondays and holidays, and from 11:30 am to 11 pm on Fridays. Needless to say, an evening visit to this palace would delight any romantic - take the opportunity to see it... when you're in the center of Rome, whether you're tossing a coin into the Trevi Fountain or visiting the Pantheon in the evening.## 6. Park of the Aqueducts

If you've seen Sorrentino's 'La Grande Bellezza', this park will ring a bell from one of its scenes, and if not, you'll discover for the first time a place with the feel of an ancient world ruin, a park whose vegetation has grown among the remains of a lost civilization.

The Park of the Aqueducts is undoubtedly one of the most interesting places in Rome, especially at sunset, which you will see framed by one of the arches of the aqueducts of Aqua Felix or Aqua Claudia, which are still standing in this park.

Visiting the park is totally free and you can easily reach it from the city center on metro line A, going to Lucio Sestio or Giulio Agricola stations, which are just a few minutes walk from the Aqueduct Park - take the opportunity to see it... if you have a day off, because it is quite far from the center of Rome.## 7. Tiber Island

The Tiber River divides the historic center of Rome and the district of Trastevere, one of the most interesting neighborhoods of the Eternal City. Over the river hangs the Ponte Cestio that connects to the small Tiber Island, charming and picturesque, like a medieval town in tiny, with its old bridges and church. It once housed a temple dedicated to Aesculapius, the Greek god of medicine, which was built to celebrate that the plague had stopped ravaging Rome, and this temple is today one of the most important hospitals in Rome.

Strolling around Tiber Island was one of my favorite pastimes during my last visit to Rome, and I went back one last time before catching my flight back, plus it's one of the perfect places from which to take a tour of Rome's Jewish Quarter. During the summer, the island hosts the Isola del Cinema film festival. There are also bars, restaurants and food stalls along the banks of the river, giving it a festive and certainly memorable atmosphere - take the opportunity to see it... if you book a cruise on the Tiber with a stop as they will probably take you there.## 8. Michelangelo's Moses

During your visit to Rome you will get to know in depth the art and genius of Michelangelo Buonarroti: the Pietà, the frescoes of the Sistine Chapel but you will not fully appreciate his art without admiring with your own eyes the Moses.

Located in the Tomb of Pope Julius II in the basilica of San Pietro in Vincoli (in the square of the same name), it is a sculptural ensemble full of disappointments: during the course of the creation of the work, the pope interrupted his donations to Michelangelo and what was to be a colossal work of 40 sculptures remained a scene in which the figure of Moses stands out.

Something curious about his image is that he appears gored, following a tradition that according to historians derives from a mistranslation of the Bible, which makes the light that falls on the face of Moses somewhat disconcerting - take the opportunity to see it... when you are near the Colosseum because it is only a seven-minute walk away!## 9. Piazzale Giuseppe Garibaldi, on the Gianicolo

Another of the locations of Sorrentino's film, 'La Grande Bella', Piazzale Giuseppe Garibaldi has a monument to the military and political figure of the same name, and a wonderful 17th century fountain, the Fontana dell'Acqua Paola.

Finally, we come to our tenth hidden gem of Rome: the Borromini Perspective. One of the most fascinating places in all of Rome, located in a courtyard full of orange trees in the Palazzo Spada, it is an optical illusion commissioned by Cardinal Spada, an 8-meter long gallery with a sculpture dedicated to Mars, the Roman god of war, which in reality appears much, much longer. This effect, the work of the brilliant mind of architect Giovanni Borromini, was created using an ascending floor and a descending ceiling, with side columns that get smaller and smaller to simulate the effect of remoteness. Palazzo Spada is located in Piazza Capo di Ferro, 13, very close to the Tiber, and you can visit it from Tuesday to Sunday from 8:30 a.m. to 7:30 p.m. with an entrance fee of 5 € - Take the opportunity to see it... before crossing the river to visit the famous basilica of Santa Maria in Trastevere.

The Best Travel Guide to Rome